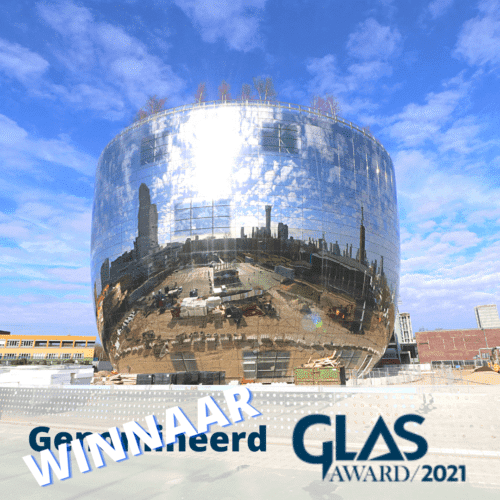 On 16 September, the time had come to present the Glas Award 2021……
During an online live event, all nominees were extensively introduced.

After the presentation of the innovation award and the talent award, the announcement of the Glaw Award 2021 was finally made.
Depot Boijmans Van Beuningen has won!

You can read more about these developments in these articles: 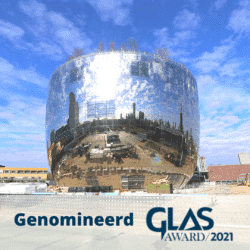 Together with MVRDV, ABT, Bam Bouw en Techniek, we have been nominated for the Glass Award 2021 for the Boijmans van Beuningen Depot project in Rotterdam.

In total there were 24 submissions in which glass played a central role : Submissions Glass Award

This project is one of the 5 nominees from which the Members of Bouwend Nederland Vakgroep Glas will choose a winner.  Thursday, September 16, the winner will be announced and the award will be presented by Niels Schreuder, chairman of the Glass Department. 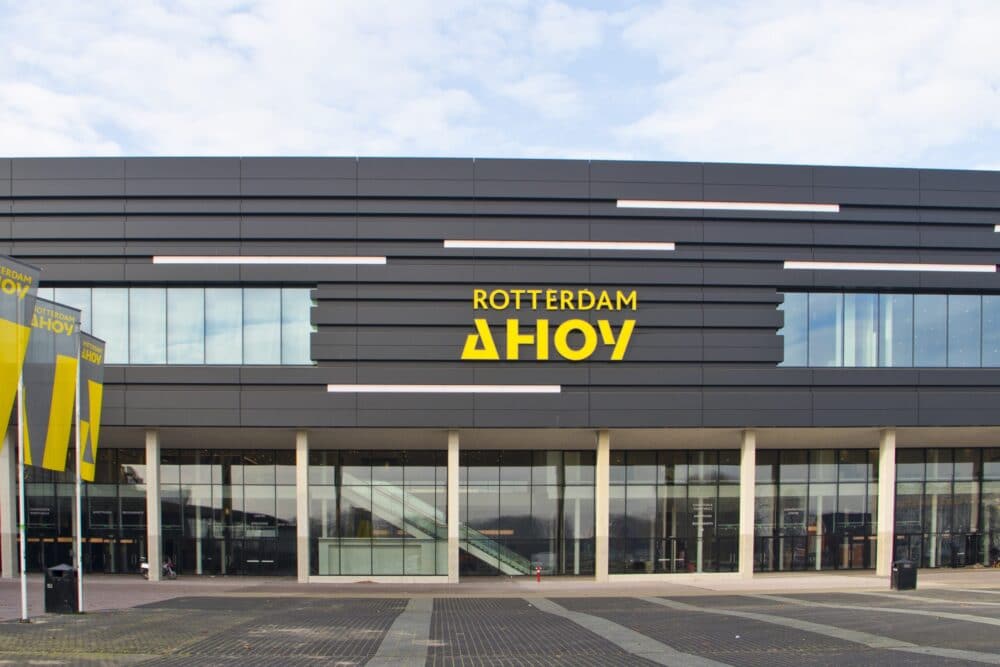 This is custom heading element

Sorba Projects has build a part of the new façade of Ahoy Rotterdam, the venue for the Eurovision Song Contest from 18 May onwards. Our expertise in the field of façade engineering made us the obvious party to carry out this project. By using 7-metre long black panels, the façade has become a striking appearance and it gets, we think, a well deserved “douze points!.

Jack of all trades

Ahoy Rotterdam is a well-known venue for concerts and other events. Since its construction in 1968, the complex has been regularly updated, renovated and expanded. It is now not only an events hall but also has an office complex, catering facilities and conference and meeting rooms.
When Duncan Laurence won the Eurovision Song Contest in 2019, the Netherlands was allowed to host one of the biggest events in the world. The question was where it would take place. In the end, Ahoy Rotterdam won the bid and the organisation of this massive event could begin.

In the meantime, the renovation of the complex was already in full swing; the entire façade had been renewed and the necessary adjustments were made inside as well. Everything was ready in time for Eurovision.
And then there was Covid … Like many events and organisations, the Eurovision Song Contest was postponed. Ahoy Rotterdam was turned into an emergency hospital instead, a task it had never performed before. But in this case, the delay was not a cancellation….In 2021, the Song Contest will definitely take place.

And that is why the façade Sorba produced for Ahoy is now in full view, enough reason to highlight this bespoke project!

The special feature of this project is the size of the panels: 7 metres long and over a metre high. Because of this exceptional size, there were only a limited number of parties who could carry out this project.
The project manager : “These are enormous panels that are difficult to handle. This made assembly a challenge, and we ultimately carried it out using a small crane.”

The chosen colour black is known to be difficult to use, as black panels can expand, deform or fade. By using Alpolic, a UV-resistant, aluminium composite, these problems are avoided. Sorba is the exclusive dealer of this product.
A remarkable part of the façade are the white strips. They seem to be part of the panels, but as soon as it gets dark, you see that they are actually light bars, which give the façade also at night a contemporary look.

A performance worthy of the Grand final

With the Eurovision Song Contest 2020 in sight, it was important that the project would not be delayed. Thanks to the good cooperation of all parties, the deadline was met on time. Sorba is proud of the contribution it has been able to make to the international image of Ahoy, the Netherlands, and with it Sorba. In short, Ahoy’s new façade is a worthy finalist!

The Eurovision Song Contest 2021 will be held in Ahoy, Rotterdam from 18 May onwards. The Grand Final is on Saturday 22 May 2021. 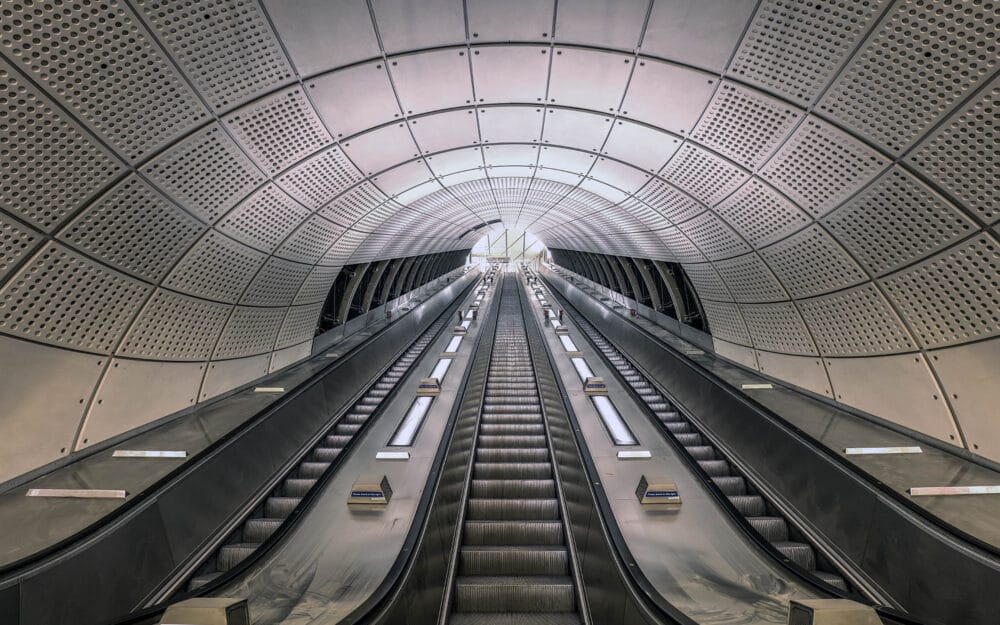 This month Rail construction News has a nice feature on Farringdon Station, part of the Elizabeth Line . In the attached link below you will find a 4 page article on this project. 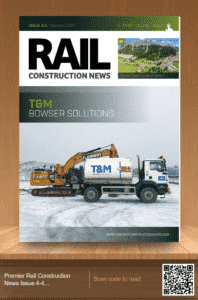 More information on the projects of the Elizabeth Line projects you can find here. 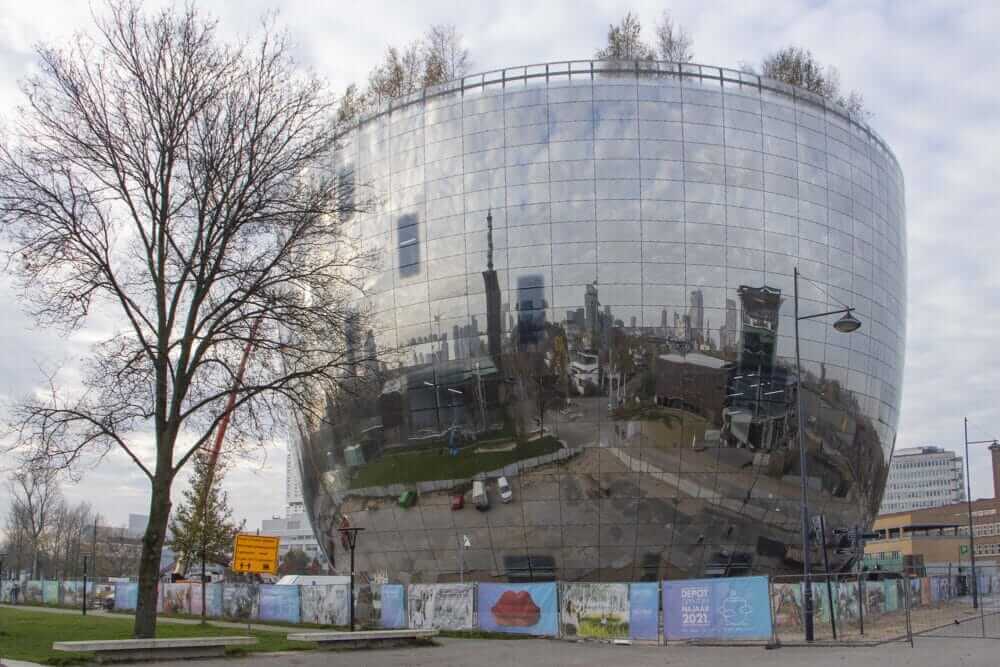 In this interview Winy Maas, architect of the Depot Boijmans Van Beuningen, talks about his vision for the spherical mirror façade and the way Sorba has implemented his idea. Maas speaks about the cooperation between Sorba and MVRDV architects, which has resulted in the magnificent façade we see today.

“The depot will be in a park in the middle of the city. The question then is, how do you make a building that loves the park. You do that in a few ways; 1. you make a round building so that you have no corners. So that you always see people and you can easily get around them Secondly by making the smallest possible footprint and that means not making it too high, so that a roof can be made on which a forest can be planted. Then it is covered with a mirror, which actually makes nature visually larger and allows you to see around the corner. You get more air and you also get more contact with the community. I think that results in an enormous reconciliation with the environment. .

In the first instance the building was designed to make it in stainless steel, but that causes 2 problems, firstly it is very expensive and secondly you cannot make windows in it, no transparency. So then we came up with the request to make it out of large mirror plates. In collaboration with Sorba, this has led to a number of questions. What is the maximum size that we can make, how are we going to make that bend and how are we going to make that transition from transparent to reflective.

We then also did this together with the maker, the mirror bender, in China. And that was also beautiful to see. Sorba guided that, how can you also make that with a maker. Also because it is so innovative, you have to do this in dialogue with the makers. I really liked that in the process and it works as you can see now. “

Want to see and read more about this project. Take a look at the project Depot Museum Boijmans Van Beuningen – Rotterdam in our portfolio.

The façade of the new Art Depot of museum Boijmans Van Beuningen in Rotterdam should blend in with its surroundings. That is the initial vision of architect Winy Maas of MVRDV. This spherical mirror façade will reflect the buildings surrounding the Art Depot. Sorba has the envelope package for the engineering, production and installation of this unique façade. The façade is almost finished and will be completed in 2020.

The design of MVRDV included the completely reflecting spherical façade. In this scheme Sorba develops the façade for main contractor BAM Grote Projecten. To build this façade Sorba uses double curved mirror glasspanels. Through the use of glass, the mirror effect will be crystal clear.  The radius of the art depot differs on ground level and on the roof. At ground level the radius is only 40 metres, and on the roof this extends to 60 metres. The façade counts 26 rows of panels with 64 glass panels per row. This leads to a total of 1664 3D curved panels. The glass panels are produced in China and every row has a different curvature in the glass.

Curious as to how we give shape to the new spherical mirror façade of Museum Boijmans Van Beuningen in Rotterdam? From the structural drawings up until the installation in Rotterdam. Follow the assembly process of these unique panels in our new video! In this video we show you how we develop, assemble and install these panels!