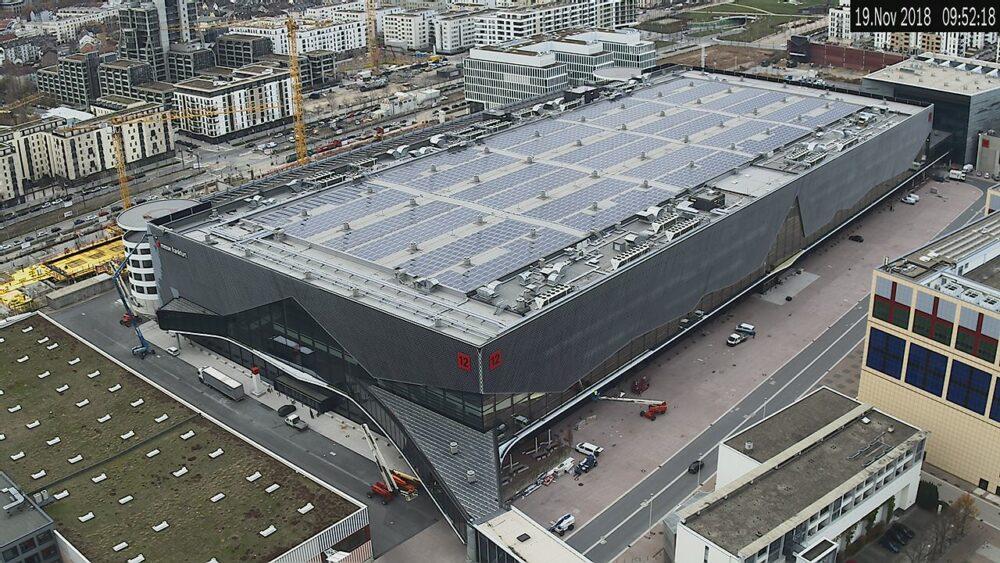 After two years of construction the new trade fair hall 12 of the Messe Frankfurt is completed. The new hall is 248 metres long, 118 metres wide and 30 metres high, which gives it a gigantic façade. The design from Kadawittfeldarchitektur asked for a complex diamond pattern. Sorba has found the solution for this because our engineers have the know how to develop special parts and techiniques. The solution; crossing special aluminium profiles  to shape the diamond pattern.

A lot of drawing and calculations had to be done to get the façade ready. Due to crossing of the aluminium profiles a lot of forces are putting a strain on the construction. These forces were calculated according to 3D statics and according to the FEA model. To make sure the structure can withstand the forces on the material. The façade had to be put up a mere skeleton of concrete and steel, therefore we used heavy stainless steel consoles to hold the weight of the façade. Thereafter trapezoidal sheeting was used as a background for the blank anodized aluminium profiles. The aluminium profiles had to be specially developed and made for this project because of the integrated slide nut system to be able to install the profiles with absolute precision. In this façade over 50 kilometres of aluminium profiles were used. One third of these profiles was unique and had to be produced piece by piece. The façade was finished with black cassette sheeting with integrated grills at ground level.

Aside this extensive façade, Sorba also worked on the cladding for the parking garage, elevated walkway and canopy. For the garage white Alpolic was used. The elevated walkway and canopy were cladded with 3000 square metres black and white flat sheets. The canopy and elevated walkway overlap and are designed with smooth curves. To precisely measure and produce the double curves in this cladding the design was drawn entirely in 3D. Thereafter the sheets had to be bent. Part of the sheets was bent cold on site and the double curved sheets had to be rolled in to shape in the factory.

In short, this project had a complex design and a huge amount of material, which all was perfectly managed by our project managers and engineers. The anodized aluminium in diamond pattern give the façade sharp edges and lines, or as the mayor of Frankfurt put it at the opening ceremony of the hall; “A building with a spectacular appearance and power”